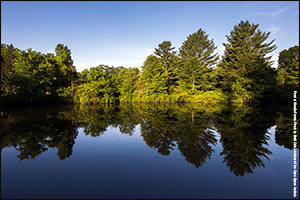 In June 2015, a 136-acre parcel of land, a portion of Giralda Farms, located in Chatham Township, was opened to the public after many years of private ownership. The Great Swamp Watershed Association is proud to have played an important part in this landmark win for open space in Morris County.

Containing a biologically valuable mix of meadows, wetlands, upland forest, and lowland forest, the property was held for 57 years as part of the acclaimed Geraldine R. Dodge estate. Following Mrs. Dodge’s death, the area became part of the privately held Giralda Farms Corporate Park. With only a few exceptions, the general public had no access the area’s stunning rolling landscape.

The situation changed drastically in November 2014 when a $14.1 million deal was struck that would return part of Giralda Farms to public use after the better part of a century. The acquisition became the single largest purchase in the history of Morris County’s Open Space Trust Fund. 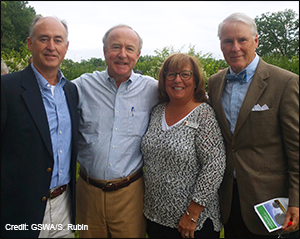 While most of the fundraising and deal making was driven by Chatham Township, the Morris County Park Commission (MCPC), and the Open Space Institute, the Great Swamp Watershed Association (GSWA) played an important role in the preservation of Giralda Farms.

The November 2014 deal conveyed title to the property to Chatham Township with management of the parcel being integrated into MCPC‘s larger 744-acre Loantaka Brook Reservation. A 2.3 mile network of walking trails was laid down along some of the Dodge estate’s old carriage roads with more trails to come. MCPC also created a new connector trail along and across Woodland Road between the Giralda Farms and a nearby trailhead leading into the eight-mile trail system at the Reservation.

Executive Director Sally Rubin represented GSWA at the official ribbon-cutting ceremony on Saturday, June 6, 2015. The ceremony was made all the more poignant by taking place on National Trails Day.

Sally praised the entire accomplishment by lauding the creation a larger green corridor for wildlife and increasing opportunities for healthy outdoor activities, such as walking and hiking, bird watching, and outdoor photography. She also noted how much the purchase would contribute to the protection of water quality in Loantaka Brook—a sub-watershed within the Great Swamp Watershed region where GSWA’s water monitoring program has often measured levels of pollution in excess of state standards.