The geologic history and composition of New Jersey will make you appreciate what a unique place in the world the Garden State truly is. In fact, few other U.S. states of this size exemplify the range of geologic ages and bedrock types found here. The offical state geologic map of New Jersey is “one of the most detailed in the nation”, according to former Department of Environmental Protection Commissioner, Bob Shinn.  This detailed map is produced using sophisticated hydrogeological and cartographic equipment…a far cry from the initial map of 1912 when surveyors and geologists gathered painstaking information on foot or on horseback. Compared to any other state of its size, New Jersey really packs a variety of geologic features and contains some globally unique formations.  In this brief article I will break down the humble garden state into four geologic “provinces” with their unique characteristics and features. 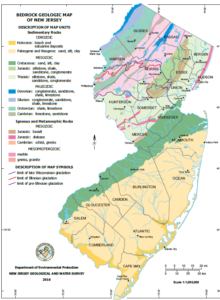 The Northernmost region of New Jersey is also the smallest in area. This region is the Northernmost tip of the Appalachian Basin, being sandwiched between the Appalachian Mountains to the West in Pennsylvania and the Blue Ridge Mountains to the South. Its key geologic feature, the dramatic Delaware Water Gap, owes its existence to the ancient Delaware River. How old is it? The river predates the mountain ranges through which it flows, and thus has had a very long time to cut a dramatic path into the bedrock. East of the Delaware, the Valley and Ridge region is built up by sedimentary layers of sandstone, shale, and limestone which originate as the sand, mud, and lime from seas and floodplains of the Cambrian to Devonian ages. The rough timeframe of these geologic ages is between 500 and 300 million years ago. Thus Valley and Ridge is a prime location for archeologists hunting for dinosaur footprints. In the distant past, this mostly flat area was compressed and de-formed in later ages into tilted uneven belts of varying bedrock types. Porous and relatively ‘soft’ sedimentary types of material, such as shale and limestone, are not homogeneously distributed but instead form thin belts which are subject to further transformation through other geologic processes. Other areas formed by sandstone are erosion resistant – thus the characteristic valleys and ridges were eventually carved out.  Kittatinny Mountain and Walpack Ridge are formed by sandstone, while Flat Brook and Delaware Valley became eroded, highlighting some gorgeous geologic formations at the Delaware Water Gap.

The Highlands cut a swath from Franklin through Andover to the Delaware River. The geologic characteristics of this region are formed by granite, gneiss, and some marble. Curiously, the bedrock of this region of New Jersey is the oldest in the state. The Highlands’ bedrock was formed during the earliest part of Earth’s history billions of years ago during the Precambrian geologic age.  Because the bedrock is very resistant to erosion, the landscape of this region is hilly and cut through with steep valley and major streams along belts of sedimentary bedrock more giving to erosion.

Fun Fact! Franklin, New Jersey is the fluorescent mineral capital of the world, producing more fluorescent minerals than any other site. A unique minor zinc ore called Willemite was once mined from the Franklin Marble deposit in Sussex county. This ore is best known from only two sites in the United States.

The Piedmont Plains are defined by water-rich sedimentary lowlands interrupted by northeast-southwest ridges and uplands of erosion resistant stone, such as the mountain chains formed by the Watchung Mountains and the Palisades. In the deep geologic past, the rifting of the Atlantic Ocean crust brought deep crust lava flows up to the surface. The rock formed by these lava flows is resistant to erosion and now forms the base of the mountain ranges of this region. The bedrock of the Palisades, Rocky Hills, Sourland Mountain, and Cushetunk Mountain is formed by diabase, while the Watchung Mountain chain is underlain by basalt – both due to lava flows. The lowland areas in between mountain ranges are underlain by sedimentary rock and form excellent aquifers. In the more recent past of the last ice age, these lowlands received massive quantities of glacial meltwater from the Wisconsin glacier, and the Piedmont was once characterized by sprawling and massive wetlands. Today, only the Meadowlands, Troy Meadows, Great Swamp and Great Dismal Swamp remain as large tracts of preserved wetlands. 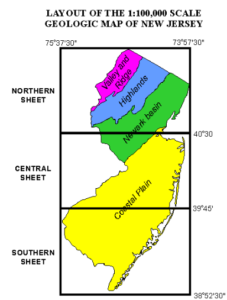 The first thing you will notice from the maps is that Coastal Plain of New Jersey makes up more than half of New Jersey’s geology. This region’s topography is very different than that of the Northern part of the state. The Coastal Plain is overall very flat and reaches as far West as the Delaware River. There are very few hills in this region and they are located at Atlantic Highlands, Telegraph Hill, Mount Holly, and Areny’s Mount.

Because this region is roughly identical to the underlying bedrock of the Atlantic Ocean all the way up to the edge of the Continental Shelf, the Coastal Plain sediments mined from this region are sand, sand, and more sand (ceramic clay and gravel, too). Also, because of the sedimentary nature and highwater table, New Jersey’s coastal plain contains massive aquifers of freshwater – something like 17 trillion gallons. Thanks to the rising and falling sea levels between each of the three glaciation events, this land’s topography, coastlines, and barrier islands are all formed by deposits from the Atlantic.

(Not so) Fun Fact: The ocean’s effect on the Coastal Plain is more recent than just pre-history. Right up until the 17th century, there are coastal county property records which today are found under the Atlantic. Unlike other parts of the US formed by similar oceanic events, Monmouth, Ocean, Atlantic and Cape May counties sit atop uncemented sediment – making it highly vulnerable to storms, tidal events, and erosion. The coming global sea level rise will pose some of the country’s most serious engineering challenges along the Atlantic coast of New Jersey.