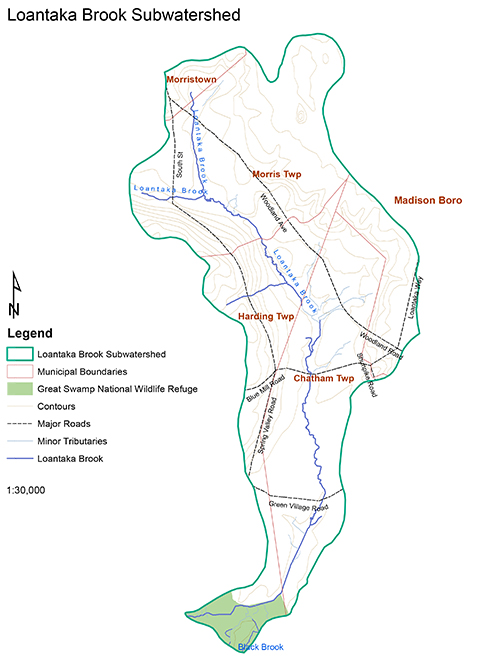 The Loantaka Brook subwatershed covers just over 5 square miles and is the smallest of our subwatersheds.

After the two main tributaries come together, Loantaka Brook is dammed to form Kitchell Pond in Morristown.  After it exits the pond, it flows through Loantaka Brook Reservation for approximately three miles before entering the Great Swamp National Wildlife Refuge, where it joins with Great Brook at the end of Woodland Road in Green Village.

Loantaka Brook flows through Loantaka Brook Reservation, which is one of the most popular Morris County Parks.  This park offers a wide range of recreational opportunities, including paved and unpaved trails along the banks of the brook that can be used for running, walking, cycling, and horseback riding.

From 2005 to 2007, the Loantaka Brook subwatershed was the focus of GSWA’s first Adopt-a-Stream initiative. This three-year program consisted of intensive water quality monitoring on multiple assessment sites on Loantaka Brook and identified two key problems; an excessive amount of road salt near the headwaters and increased nutrients downstream of the Woodland Water Pollution Control Utility. The full report can be found here.

Loantaka Brook is the most impaired stream in the Great Swamp Watershed.  The heavily developed areas around its headwaters (53% of the entire subwatershed is developed) contribute to elevated nutrient and salt levels in the stream.  Storm drains located throughout the subwatershed transport stormwater runoff, including road salt, fertilizers, and other pollutants directly into the stream.

In 2011, GSWA identified Seaton Hackney Stables in Morris Township as a contributing factor to the degraded water quality along Loantaka Brook. The facility, owned by Morris County Park Commission, was a source of bacteria, nutrient, and sediment pollution into adjacent Loantaka Brook during precipitation events. GSWA was awarded a $300,000 grant funded by EPA through the DEP, to remediate Seaton Hackney Stables. To reduce stormwater runoff from the property into the stream, ponies were relocated further away from the stream, a new paddock was created, detention basins constructed, and water was rerouted. Working with PSEG, over 450 trees and hundreds of shrubs were planted along the stream, helping filter the animal waste and other contaminants before they reach the stream

The 2015 Great Swamp Water Quality Report Card data continues to show Loantaka Brook as having the lowest macroinvertebrate population of all our streams.  It ranks very poor in five of the categories monitored, including road salt, phosphorus, and bacteria.  Visual assessments have noted increased sedimentation in the upstream areas further degrading wildlife habitat.

Loantaka Brook faces many problems, below are ways you can help: