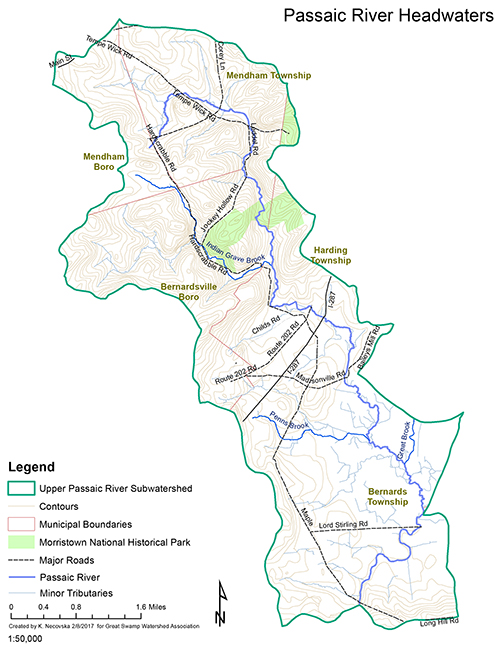 The Passaic River Headwaters subwatershed is the westernmost of the Great Swamp Watershed’s five streams and covers about 17 square miles.

The Passaic River Headwaters is formed by the union of three tributaries, originating in Mendham Township, Mendham Borough, and Bernardsville.

The headwaters flow alongside or through more Great Swamp Watershed communities than any of the other four streams. Mendham Township, Mendham Borough, Bernardsville, Bernards Township, Harding Township, and Long Hill Township all contain portions of the headwaters.

The northernmost stem of the headwaters flows from Mendham High School and then through a mix of residential properties and protected land. After emptying into Leddel’s Pond, it flows alongside Morris County’s Lewis Morris Park and then through the Morris Area Girl Scouts Camp, after which it flows through a section of the Morristown National Historical Park’s Jockey Hollow Area and then the New Jersey Audubon Society’s Scherman-Hoffman Sanctuary. At this point, the headwaters are joined by the Passaic’s second major tributary, which arises in Bernardsville Borough and flows almost due east. Together the two tributaries then leave the protection of Scherman-Hoffman, traverse Routes 202 and I-287, and flow through residential sections in Bernards and Harding Townships into Osborne Pond and then into the Basking Ridge Golf Club. The third tributary joins the main stem inside the Golf Club, and the three flow as one between the Great Swamp National Wildlife Refuge to the east and Somerset County’s Lord Stirling Environmental Education Center to the west.

The Passaic River Headwaters, after joining the other four streams of the Great Swamp Watershed exit the Great Swamp National Wildlife Refuge at the Millington Gorge. The river then travels approximately 80 miles, and through 45 municipalities, before emptying into Newark Bay. Along the way, the river becomes drinking water for more than two million New Jersey residents.

The importance of protecting the upper reaches of the Passaic River from non-point source pollutants associated with urban and suburban development cannot be overstated. Because it originates in a relatively undeveloped portion of the watershed, the first few miles of the headwaters face fewer issues than other streams in the watershed. NJDEP labels them as C1-trout producing waters above Osborne Pond in Bernards Township, the highest rating that can be given by the state.

The 2015 Great Swamp Water Quality Report Card found that the headwaters meet or exceed every standard set by the state with the exception of elevated road salt in the winter months.  However, as the stream flows out of Osborne Pond in Bernards Township, there is a decrease in the overall water quality.  Specifically, macroinvertebrate results indicate this area of the Passaic River Headwaters is being impacted by poor water quality, with the NJ High Gradient Macroinvertebrate Index (HGMI) results in this region being in the poor category.  This may be a result of the collection site being just below the Osborne Pond impoundment, where water temperatures can be elevated and pH rises during the day.

The Passaic River Headwaters faces many problems, below are ways you can help: