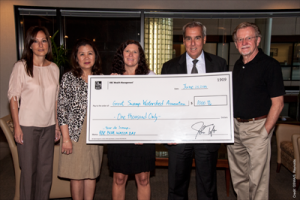 By the end of the spin class, our intrepid (and exhausted) fundraisers had earned $1,000 for GSWA. Later in the month, on RBC’s annual Blue Water Day (June 25), RBC Parsippany Complex Director Eric Siber officially presented GSWA Executive Director Sally Rubin with a signed check for all the money the spinners had earned.