Loosestrife (Lythrum salicaria) is tolerant of many water habitats, and produces as many as 2 million seeds a season, causing it to spread very rapidly. Leaf size even changes to maximize light, and these characteristics allow it to easily out-compete many native plants. This greatly decreases biodiversity, even seriously reducing populations of animals such as the rare bog turtle (Clemmys muhlenbergii).

Purple Loosestrife likes damp and marshy areas, and a single root system can send up 30 to 50 stems that can reach 8 feet high. Flowers with five to seven purple petals bloom in summer. The leaves are opposite or whorled, and are smooth and narrow. Leaves turn bright red when they dry in the autumn. 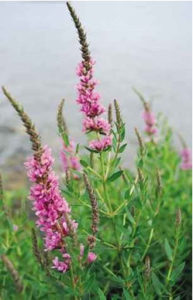 Unfortunately there is currently no effective way to eliminate large stands of Purple Loosestrife. The best way to control for this invasive species is to detect its presence early, and eliminate it while protective native plants. Small populations can be pulled out manually, and Glyphosate herbicides effectively kill it. Unfortunately, this chemical also affects other plants in the wetland. Insects have been released in an attempt to reduce the Purple Loosestrife populations, and so far two species of Galerucella beetles have been effective in reducing a large percent of the biomass of the plants.

If Purple Loosestrife is removed, there are good native species that like the same habitat, such as Delphinium (Delphinium spp.), Foxglove (Digitalis purpurea), and Lupine (Lupinus).