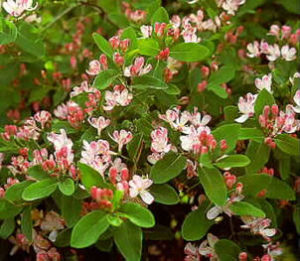 The non-native honeysuckles (Lonicera spp) leaf out earlier in the spring than many native varieties and hold them later in the fall, helping them out-compete the other species. These shrub honeysuckles limit the ability of forests to regrow by reducing seedling establishment and herb species variety.

Each of the invasive shrub honeysuckles has opposite leaves and flower in the spring. Tatarian honeysuckle, a prominent species in the Great Swamp, has smooth leaves and very light pink flowers with red fruit.

The shrubs can be pulled or dug out of the ground, or the plant can be cut at the base (but would have to be repeatedly cut in the spring and fall). Herbicides can be sprayed on foliate late in the growing season or painted on the cut stumps to kill the shrubs.

If an invasive shrub honeysuckle is found in your yard and is successfully removed, it can be replaced by native species such as spicebush (Lindera benzoin), ink-berry (Ilex glabra), gray dogwood (Cornus racemosa), northern bayberry (Myrica pennsylvanica), red chokecherry (Aronia arbutifolia), and arrowwood (Viburnum dentatum).