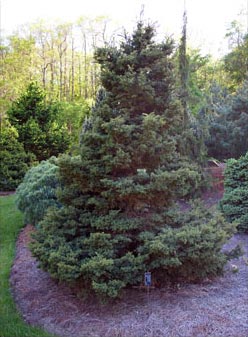 For many American homes, the centerpiece of Christmas decoration is the Christmas tree, often a spruce tree, cut locally. Year-round, spruces are trees ornamentally popular with landscapers. They are admired for their all-seasons green color, and their tidy symmetrical growth profile. They have dense branches, but they are easy to decorate.

We should know that the spruce tree has more talents than just looking pretty. Spruce is very useful as a construction wood. It has many uses as lumber, ranging from general construction work, to crates, to highly specialized uses in wooden aircraft and as a “tonewood” in many musical instruments (including guitars, mandolins, cellos, violins and the soundboard at the heart of a piano, and the harp. The Wright Brothers’ first aircraft was built of spruce.

Spruce is one of the most important woods for paper making, as it has long wooden fibers which bind together to make strong paper. Spruces are commonly used in mechanical pulping as they are easily bleached. Spruces are cultivated over large areas as pulpwood.

Interestingly, the fresh shoots of many spruces are a natural source of vitamin C. Captain Cook made alcoholic sugar-based spruce beer during his sea voyages in order to prevent scurvy in his crew. The leaves and branches, or the essential oils, can be used to brew spruce beer.

Native Americans in New England took the sap to make a gum which was used for various purposes, and which was the basis of the first commercial production of chewing gum. Also, the resin of spruce trees was used in the manufacture of pitch, at least until petrochemicals were found to be better for this purpose.

We have many varieties of spruce trees in the Great Swamp Watershed. Sadly, many of them were damaged or destroyed recently by Hurricane Sandy. The root systems of spruce trees are often quite shallow, making them quite susceptible to high winds. Their graceful presences will be missed for a long time, as it will take decades for new growth to fully replace them.

Editor’s note: Some spruce trees, like the Norway spruce (Picea abies), were introduced to North America from Europe, and are now considered invasive species. As they invade an area, the Norway creates a new habitat that few native plants can tolerate. The soil surrounding stand of Norway spruce often becomes acidic and devoid of many important nutrients. Shade canopy also becomes very dense, preventing light from reaching native plants close to the forest floor.

Thankfully, homeowners and landscapers can avoid perpetuating the spread of invasive spruces by choosing to plant native spruce species instead. The red spruce (Picea rubens) is one of these native species. Its natural range stretches from the Canadian Maritimes through the Appalachian Mountains to western North Carolina. The red spruce thrives on moist, sandy loam, and also on dry rocky slopes. These trees can reach heights of 60 to 80 ft. 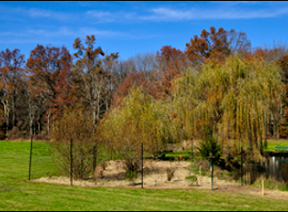