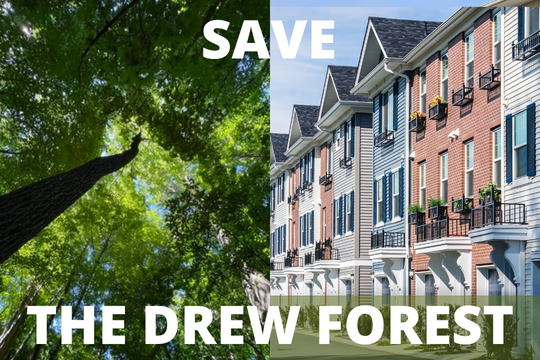 Morristown, NJ — Great Swamp Watershed Association (GSWA) has become the latest organization to officially join in the efforts to save the Drew Forest from development.

Located on the Drew University campus in Madison, New Jersey, Drew Forest is a 53-acre undeveloped, biodiverse preserve that is home to glacial ponds and some of the oldest trees in Morris County. The Forest has been called a living classroom for teaching and research for Drew University students and the wider community.

Drew University recently requested that the Borough of Madison rezone the Forest to potentially allow for the development of hundreds of market rate housing units. This has prompted more than 15 municipalities, government agencies, and organizations working with Friends of the Drew Forest to urge Drew University to partner with the Borough of Madison to preserve this tract of land.

“Great Swamp Watershed Association is proud to support this important preservation initiative,” stated Sally Rubin, GSWA Executive Director. “The Drew Forest is an invaluable natural resource that will be lost forever if the Borough is ordered by the court to allow construction and the land is fragmented by development.”

The Buried Valley Aquifer flows beneath the Forest which provides all the drinking water for the boroughs of Madison and Chatham and is a major source of drinking water for 30 municipalities in Morris, Essex, Somerset, and Union County. The Forest provides critical recharge, a natural cleansing process, that captures and purifies approximately 71.5 million gallons of rainfall each year. This ecosystem service is valued at $1.5 million annually by the Department of Environmental Protection.

Friends of the Drew Forest, a volunteer advocacy group, was formed by concerned citizens to permanently protect and sustain the Forest and to raise awareness on the value of all forests. The group has proposed a “win-win” solution; a conservation sale where Drew University would work with Madison Borough to sell the land for full market value to a conservation buyer. The organization is asking the public to support this initiative by signing their online petition. With more than 13,000 signatures towards the goal of 15,000, The organization states, “The petition is a clarion call to local officials, Drew University and the press.” To learn more and to sign the petition, visit friendsofthedrewforest.org.

About the Great Swamp Watershed Association

Founded in 1981, the Great Swamp Watershed Association (GSWA) is a non-profit organization dedicated to protecting and improving the health of the Passaic River through science, education, land preservation and stewardship, and advocacy. In collaboration with partners, we work to instill our communities with an awareness of water’s effect on health and the beauty of the environment, from source to sea.  The organization educates nearly 5,000 school children, monitors over 30 stream locations, and holds approximately 50 public events each year.